My initial delight with steampunk was almost certainly connected to my love of good sci-fi and fantasy. The close connection between magic and technology is essential for the genre, if only for two reasons:

But after hundreds of cosplay pictures, derivative movies, and video games, the novelty began to wear thin. Yet one day, about a year ago during a quiet afternoon of unemployment, I found myself playing a game described thusly, “In an apocalyptic steampunk future, you are a privateer ferrying goods across treacherous airspace. Protect your airship and yourself from an onslaught of pirates, and safely reach your destination to reap the rewards.”

Admittedly, by the description, I was expecting something RPG-ish, a simple, stripped down Skies of Arcadia (an exceedingly wonderful Dreamcast game), but Guns of Icarus was decidedly not that and my expectation certainly explains some of the other reviews you can find online:

“You’ve already imagined something more spectacular than Guns of Icarus can offer. This third-person action game’s midbattle story panels may hint at such a time and place, but the game itself is a one-note diversion that tips its full hand within minutes of starting your first play-through. As it stands, there is a bare-bones version of the game you can already play for free within your Web browser.”

“There is really no story here at all. Each level has a little postcard before it with some trite description of the hardships of that region, but there is no explanation whatsoever of the main character’s (note that I don’t use the word protagonist) motivations. Why is he delivering cargo? Why does it have to be in a Zeppelin? Who is he delivering to? Why does he commit suicide-by-pirate at the end? Why did he bring cargo with him when he went off to die? No explanation is given for anything, and the entire campaign is over in about 20 minutes.”

These descriptions are as accurate as they are misguided. The game was originally developed for a web browser. I have never found a robust story in a browser based game (please prove me wrong), let alone one that lasts more than twenty minutes. Their beauty tends to be in simple, repetitive game mechanics, something fun to pick up now and again, play a quick round, and then get back to work. If that’s the standard, then this game shines brilliantly. 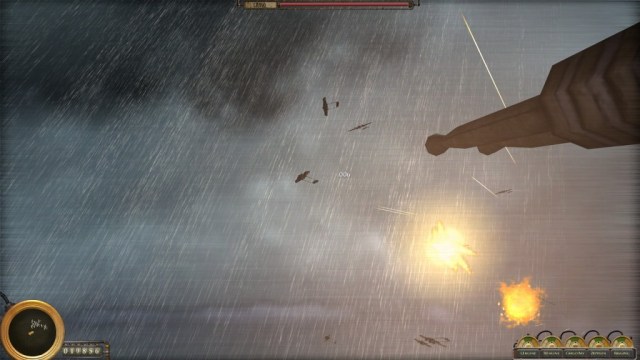 There are only really two game mechanics, shoot the attacking pirates and repair your ship. Each mission is measured by distance between the two locations you are carrying undescribed cargo. En route you are assaulted, depending on difficulty, by three different sorts of aircraft who damage your will damage your engines (which will eventually halt your progress forward), cargo hold (you get ship upgrades, if you have enough cargo left over), rigging, and the zeppelin (which will make you explode). The longer the route you take in the campaign, the more upgrades you get, and the more prepared you are to go Into The Breach. 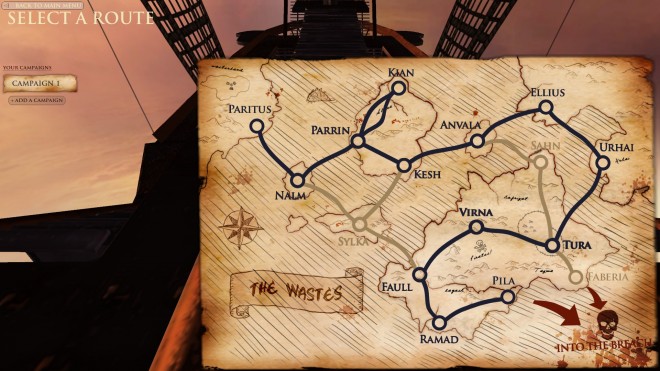 You can’t not die in The Breach, the entire point is to survive as long as possible by killing by managing your time killing air pirates and repairing your ship. Your distance meter ticks up, rather than down, and the further the distance, the further the bragging rights.

Multiplayer co-op (up to four) with url-based invites which, combined with Twitter, would make it incredibly easy to have a mid-afternoon pick-up game.

Totally worth it for five bucks (originally, ten for the full version), especially if you can sucker a few friends to buy it on a quiet Saturday afternoon. And, if this game does tickle your steampunk funny bone, you should be aware an MMO is in development.

*For the non-geek: “Any sufficiently advanced technology is indistinguishable from magic.”