Grief, Memory, and a Video Game

We Simones are an exceedingly practical, irreverent folk regarding death. Case and point: last year, over Christmas dinner, we discussed who would be the executor of my father and step-mother’s will without blinking and an eye (thankfully, my sister got the short end of that stick). And, not two days ago, my father taught me the meaning of the word “gorked” in the less than pleasant context of a cyclist hit-and-run (we both chuckled at the folk etymology of the word).

Yet I also happen to abhor the euphemism ”passed” because it seems to defang the reality of the situation (and also because my mind always supplies “gas” after it) and have flat-out wept at far too many contemporaries’ funerals for a man at the age of thirty.

This is all to say that I have a hard time taking any sort of artistic expression about death seriously since it tends to be heavy-handed. Melodrama is particularly unforgiveable in my aesthetic. So, you might imagine my skepticism about the French RPG, Winter Voices, about dealing with your father’s death.

Literary in tone, I can’t help but wonder how the French would feel or whether the ending will come off as silly as Flaubert’s A Simple Heart. (Alas, je ne parle pas français.) Still, after nine hours of play, whatever literary ham-fistedness existed was forgiven or, at least, justified since RPG actually means more than just turn based combat with number crunching.

The game begins just after your father’s funeral I found myself wandering in my small, northern, childhood town talking to childhood friends and neighbors. My humor attribute was high, so I had a number of dialog options ranging from laughing to cold and stern. (There is actually an acheivement named Les Aubes Sont Navrantes: “Sob or Sniff 20 times.”) And, while I haven’t determined whether or not those responses actually change the game or your character, I did find myself wanting to make my character contextually aware and consistent. 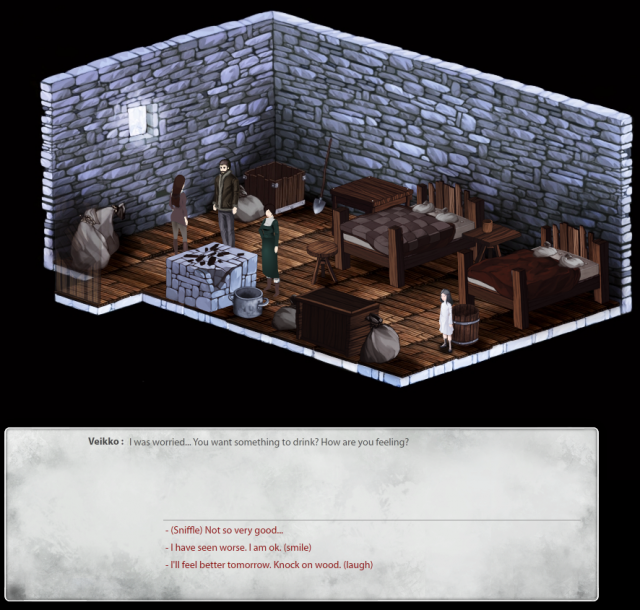 I spent a couple of hours wandering around the small town trying to piece together the NPCs relationships (daughters, sons, wives) and how I know them. The Lisakki’s, for instance, were nice people. Magnus and Maija offered there condolences and the elderly Jesper was exceedingly kind to me once I reminded him he attended my father’s funeral yesterday. Even Stig was kind, despite the obvious distaste his wife, Kati, has for me (I should have known better than to talk to her, she’d alway been a bitch to me, apparently).  Fed up with Kati, I decided to go visit the foreigner and friend of my father, Olov to piece together a little more of who my father was.

Two things then struck me.

First, I actually wanted to roleplay. I became involved in her relationship with the town. I didn’t select dialog options that were more expedient or beneficial for “the best ending.” (I not sure if there was such a thing and I am pretty sure I don’t care.) And it didn’t feel like the “I need to talk to everybody” new town grind.  Tell me. When does that happen?

When I think about days past, when dear friends were lost, and the days following the news, I recall a sort term near-schizophrenia. Laughing and fine one minute,  a turn of phrase, a peculiar movement of a hand, a familiar place would unpredictably force old memories of the person in my head. The pressure would be unbearable, the condolences meaningless, and joy dead. There was not way to beat these feelings, you just had to let them pass. 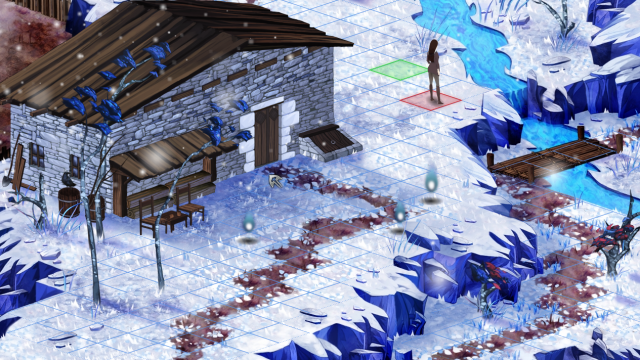 While simply interacting with people yields experience [points], the traces of those conversations or places you find yourself may, themselves, evoke memories (encounters). Persistent Memories or Negative Feelings hound you, slowly draining your energy, and the ground itself may contain Buried Tramas (traps). The goal, consequently, cannot be to destroy or kill (memories always persist!), but to survive. If you do, you gain experience [points], but if you don’t, the game simply continues without any bonus since you learned nothing. 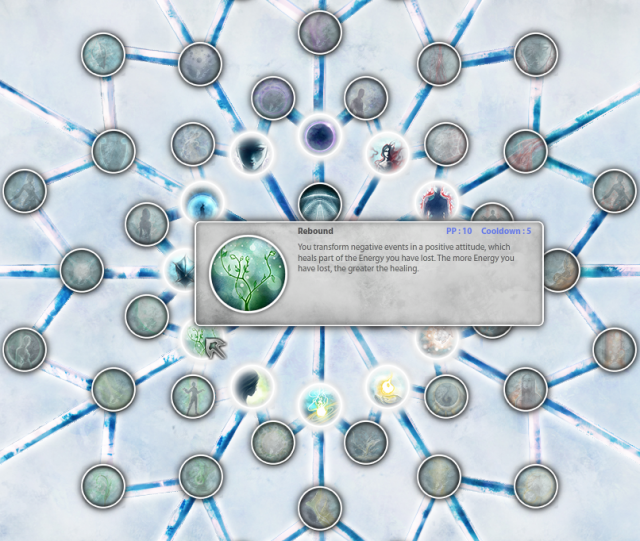 The primary survive skills are Repel, which simply pushes memories (enemies) away, and Anticipation, which mitagates the damage received. But, as you level, your skills do become more sophisticated. For example:

Betrayal: “You deny your own personality in favor of a better one. This skill prevents enemies further than 4 tiles away from you to attack you. This skill lasts until you are damaged

Coolheaded: “You assess the situation and handle problems one after the other. All enemy are pushed back except for the closest one.”

Consolation: “You find solace in what is left, which makes you gain Energy. This potency of this skill is based on Charisma.”

And your character’s attributes are equally interesting: Humor, Will Power, Memory, Perspicacity, Charisma, and Intuition, each of which has a very important role in encounters. My favorite, Memory, is of chief importance since the better it is the more experience you get, but also makes you more subseptable to damage.

Are you beginning to see the internal logic here? There is no magic or technology overlayed on the world (yet, anyway) to make the game “fun” or the near meaningless game mechanics of [insert JRPG* here]. The game mechanics themselves are not only analogies to real life experiences, but also perichoretically interact in game in ways appropriate to their names out of game. Every encounter is not simply a way-point between cutscenes, but an integral part of the story: the game is not analogically separate from narrative.   So, if there is any way to call this game innovative, that’s it, the game design and narrative are shaking hands.

If more game studios played by Beyondthepillars’ rules, the narrative junkies of the game review world wouldn’t know what to complain about. Games would feel whole.

The first episode of Winter Voices is available for Mac or PC on Steam for five bucks.

*For the record, I am an unabashed JRPG fan.

NB: For some reason, any glowing game review made online about an indie game must contain the nearly vacuous phrase “innovative.” This is me fulfilling that quota.